Why I Hate Soccer 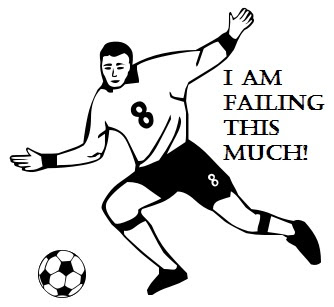 So at long last I have decided to wrest free from my inner sanctum the explanation of why I hate soccer so much.  I will explain and defend why it offends me intellectually and makes my very genetic makeup quiver with disgust.  In elucidating my position I hope that I will recruit others to begin a global movement towards eradicating this abhorrent past time like the innumerable species we have already destroyed during our awesome time as rulers of the world.

Let's get one thing straight right off the bat: nowhere in the Bible does it say, "...and during the Fourth Year God said, 'Let There Be World Cup,' and he saw that the Cup was good."  Mohammad has no position on soccer, nor do Buddha, Confucius, Vishnu, the Ying-Yang Twins, and L. Ron Hubbard.  With that said--people need to stop treating the World Cup like it is a religious event and soccer in general as if it is a holy athletic institution.  I would even argue that soccer's perceived popularity should not be confused with mere prevalence.  Of all the sports in the world, soccer requires the least of its participants: something spherical that can be kicked around, a few warm bodies, and miles of empty space.  Even the poorest nations in the world have those things and, given the endemic poverty that persists in so many of our globe's nations, it should go without saying that soccer would be played in such spaces.  As the great Puertotalian philosopher Edwin Jesus Alexander Emmanuel Rodriguez Napoleoni once said, "People drink contaminated water across most of the world but the fact that they do it doesn't make it a popular activity--it is done because there is no alternative."  (Okay...so he might not have said that exact thing but it is a close approximation to a generalization that he might once have made.  15-Love, me over soccer).

So...why the hatred for soccer?  Simple: it is a slap in the face of the hundreds of thousands of years of evolution that we, as human beings, have undergone.  (Seriously...how is it still the "Theory" of Evolution in the twenty-first century?)  No joke--Charles Darwin is rolling over in his grave.  The Galápagos giant tortoises are asphyxiating autoerotically inside of their shells.  The Komodo Dragons are eating people.  Okay...so maybe the second fact isn't true...but the third one sure as hell is...and it is awesome!

Anyway, back on track.  If Darwin were alive today he would hate soccer.  For all we know, he probably hated it when he was alive, if he knew about it.  In fact, I'd guarantee it.  I have a credible source: me.  Why would he feel this way?  Soccer ignores the two key traits that make us the most dominating force on the planet: a superior intellect paired with opposable thumbs.  The only use that soccer makes of said thumbs is with toss-ins and goaltending--both are arbitrary uses that frankly are unnecessary; one could still "toss-in" the ball without hands as could one defend the net without any arms.  As for not utilizing the intellect...well...how else could you explain why twenty men on a field that is over one hundred and ten yards long by over seventy yards wide often cannot get a decent sized ball into a net eight yards wide and eight feet high a single time over the course of ninety-plus minutes?!  Inexplicable.  Fail for soccer.  I'm up 30-Love for those of you keeping score at home.

I take it as an affront to my genetics that soccer fails to make use of those precious traits that we worked so damn hard to develop over the last two hundred thousand years.  As I've said numerous times, soccer is nothing more than "Lord of the Dance" with a ball...but minus the music, the outfits, and Michael Flatley.  Epic fail for soccer.  PLUS, that type of dancing purposely avoids using the arms and hands as a form of protest, thereby utilizing the superior intellect.  40-Love me, and 30-Love Lord of the Dance versus soccer.

I mean, seriously--look at the other popular sports in America (no--NASCAR is not a sport, it is a competitive form of driving.  Still more evolved than soccer though since it makes great use of both hands and feet!).  Baseball, Football, Basketball, and Hockey all demonstrate an elaborate mixture of precision and speed, violence and grace.  I mean--look at this run by Adrian Peterson:

The skill needed in baseball to hit a ball that small, moving that quickly, with a bat as relatively thin as it is, is incredible.  Football collisions often produce more g-forces than a car crash, not to mention the incredible precision involved with top-tier quarterbacks' passing ability and the sheer power of running backs and linebackers.  Basketball requires incredible athletic ability both on a horizontal and a vertical plane.  Hockey might be the most difficult sport of all, with players reaching speeds in excess of thirty miles an hour on their skates and hitting the puck causing it to exceed one hundred miles per hour, all while shooting at a net that is largely protected by a goalie who is as flexible as a contortionist and armed with enough padding to make Barry Bonds blush.

Random list of sports that are more evolved than soccer:

Common denominator: opposable thumbs.  I don't know what to do with Equestrian Sports and the Westminster Dog Show...but I'm sure given enough time I could find a solid argument to prove that they too are more evolved than soccer.  Synchronized Swimming is something that dolphins do too and, well, dolphins are awesome.  Another fail for soccer.

Again we must turn to the great Darwinian scientist--Charles Darwin--and ask, WSWCDFTMAITW? (What Sport Would Charles Darwin Find The Most Awesome In The World?) Based upon Darwin's two most beloved natural principles: Survival of the Fittest and Evolution/Adaptation, I believe that the only possible answer to this epic question is: Mixed Martial Arts. 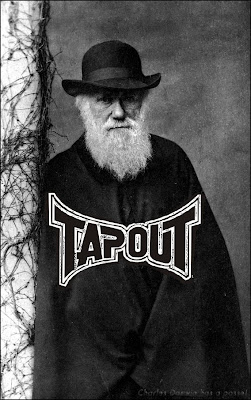 If Charles Darwin were alive today I believe he would be a raging fan of the UFC.  Nothing is more savage and beautiful than the tactical physical destruction of one man over another, using a combination of his advanced intellect as well as his God-given natural abilities to dominate him.  MMA combines the best aspects of all of the greatest sports but simplifies the purpose to the most basic natural level: kill or be killed (theoretically).  Darwin would bust a nut every time he would watch these fights:


MMA is cerebral.  It is violent.  It is tactical.  It is an adrenaline rush.  It combines instinct and ability, not championing one over the other but rather a combination of both with the rightful victor rising up at just the right moment.  It is the physical manifestation of Darwin's greatest beliefs, set into motion and existing in direct, polar opposition to the putrescence that is soccer.

If Darwin were given the pulpit I would imagine that he wouldn't recommend the public hanging of soccer but would instead endorse the re-introduction of an older version of the sport that, in a beautiful way, combines the core elements of the sport in question (soccer) with everything awesome about Darwin's favorite athletic event (MMA).  As they did with all things, the Mayans had perfected soccer in their time.  In the old days they (and possibly some Native Americans, which would stand to reason since they are Americans and we steal all of the good ideas, make them better, then claim that they were ours all along) would play across a field of dozens to even scores of miles.  The bouts would last not simply for days or weeks but until one team was simply too weak to continue.  This team would then be eaten by the victors.  Oh and they would use a human head for a ball.  How bitchin' is that?  If the Vikings ever took a break from their pillaging and being awesome, they might've played too.  Of course they would have destroyed the Mayans and Native Americans, eating them while the game was still going on.


In case you couldn't tell, fair reader, I was only kidding.  I don't hate soccer nor do I hate the World Cup.  Landon Donovan is my favorite player and I root for the US whenever they are engaged in international play.  I think that the World Cup is a phenomenal event because it brings together practically the entire world in good spirited competition.  What I can't stand, in actuality, is America's response to the World Cup.  Where are your balls great States of United?  We are such snobs when it comes practically to  EVERYTHING else (Metric System anyone?  Only drug dealers know how much a gram actually weighs!), INCLUDING soccer (it's called football everywhere but here), it just strikes me as immensely hypocritical that we put on this faux interest in the World Cup that is meant to imply that we are as into soccer as the rest of the world all of the time.  Go into any bar in New York City during the World Cup and you'll find different promotions or themes related to the tournament, as well as the games themselves dominating the television screens.

I understand the hypocrisy from an economical standpoint: tourists and foreigners alike love to watch soccer and love to drink...so why not give them a place where they can do both in Manhattan?...but it still irks me nonetheless.  Seriously America, it's unbecoming of you.  It's like being the parent who shows up to a concert for a band like Linkin Park or Papa Roach wearing a torn black t-shirt and making devil horns while bobbing your head arrhythmically.  Maybe you do listen to the music...but it just comes across as disingenuous and quite frankly embarrassing to see your old ass at the concert.  Ditto for Americans watching the World Cup.

Alright let's wrap this nonsense up.  Obviously soccer cannot possibly be the worst sport ever; that ignominous title belongs to Hacky Sack.  Hacky Sack (also called "Footbag," which sounds like something you would call someone else in an attempt to demean him or her or something that you would find in some really underground, amateur fetish porn video that you would bring up in conversation with your friends, pretending like you've never seen it but secretly wanting to know if any of them have so that you can confess that you saw it too and maybe not feel so bad about yourself as you cry yourself to sleep each night) is soccer without the running and the goal scoring, plus it is played only by preppy college kids and hippies.  No offense hippies.  I don't want to have to deal with your grammatically incorrect rage flying my way.  I'm looking at YOU Wavy Gravy. 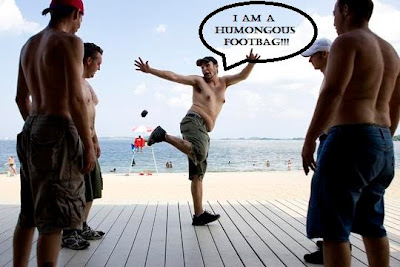