"The Associated Year": A Memoir. Episode 4: "The Budweiser Incident"

The Budweiser Incident
Anyone who knows me knows that I love to sample as many different types of beers as possible.  I'm currently at 515 different beers and hope to hit 800 before the year is through.  Exploring different beers, or even the same styles from different brewers, helps one to develop a more mature palette that really unlocks the flavors and aromas that the brewers intended for their beers to impart.

Wait, what?  This is starting to sound like a snobby beer connoisseur pamphlet.

What I'm getting at is this: I hate Budweiser.  And by hate, I mean absolutely ABHOR it.  For one, it offends my mature palette, what with its corn-piss flavor and inclusion of formaldehyde.

More than the offensive flavor, odor, and inexplicable popularity/ubiquity of the beer (if you're one of those douchebags who wiggle Bud Light bottles back and forth between your fingers at bars please purchase a thirty pack of Bud cans, empty them all into a large container, place your head inside of the container, and do not remove it until...you know what?  Let the coroner remove it.  You might as well be holding a gigantic glass dildo.  In fact, you would look EXACTLY the same doing that as you do holding the Bud Light.  Asshole.) is a very sound reason for my hatred:

Now, I would be less than truthful if I cited the Budweiser Incident as the sole source of my ire towards the beer (THAT happened, ironically, during my next deli job).

You see...people in my neighborhood seemed to favor Budweiser over most other beers; we sold shit tons of it during the summer months.  The problem, though, wasn't the outflow of Budweiser but rather the returning inflow.  The deli, like most stores of its ilk, accepted bottle and can returns.  Engaging in such activity made sense for the men and women who would buy eighteen- and thirty-packs as if the world were going to end; they could easily earn enough (a nickel a can or bottle, mind you) to purchase yet more shitty beer.  The problem, though, was that I was the one who had to deal with those returns (well, me and the other stock boys...we were all equally scarred by this).

People would often bring back the cans or bottles in plastic bags.  As you would imagine, this would mean that there would be many bags of returned bottles and cans...sitting in the store...waiting for me to place them into their respective bins in the back of the store...where it was, at times, over 100 degrees.  It wouldn't have been a terrible task if people had the decency to take the time and to make the effort to at least rinse the cans or bottles out.  Naturally, they didn't.  So now you had a bag filled with literally dozens of cans and bottles half- or quarter-filled with hot, viscous, scuzzy Budweiser that had not only been sitting in the store the entire day but had likely been sitting out in a yard somewhere, cooking beneath the blazing summer sun.

But, still, that wasn't the worst part.

These derelicts would often put out their cigarettes in the cans and/or bottles.  So now, on TOP of the hot, scuzzy beer smell, you have mingling with it the reeking stench of half-smoked Marlboros, Newports, Parliaments, Merits, Camels, Misty 120s, and a handful of other types of cancer-sticks (but never any Benson & Hedges--theirs is a classy crowd, it would appear).  I'll bet you never thought about a cigarette going sour or turning rotten nor have you offered any cogitation to the smell that such a cigarette would then generate.  I'll admit that I never thought about it either...but that's because I was able to experience it on a seasonal basis between the months of May and September.

NOW we are at the worst part: you couldn't always tell which cans were going to have beer in them nor were you able to discern which would have the nicotine wünder-logs hidden inside.  This, in turn, meant that you could grab an innocuous-looking bag, think it's got maybe a bottle or two in it, rip open the bag, and find your arm (or worse) covered in the sticky, shitty-smelling commingled ejaculate of a can of Bud and a half-drained Marlboro.  You also have at least thirty more bags to go through...so don't go running off to the bathroom to throw up and try to wash yourself up--you'll just wind up going through the same thing again.

Invariably, you would come upon a smart-ass worldly motherfucker who would pack twenty or thirty different cans and bottles, ranging anywhere from Boylan's soda, to cans of Coca-Cola, to any sort of beer or wine cooler.  THIS low-life slobbering prick is the one that would really fuck your day up because now you're covered in more than a little bit of Budweiser seminal-emission, it's upwards of 110 degrees where you are, and you've been standing there for twenty minutes...and now you have to go through this eclectic blend of bullshit thus delaying your much-earned and much-needed wash-up.  (I suppose that you could've said, "Fuck it," and just tossed the cans and bottles willy-nilly...but I'm a stickler when it comes to work and thus I did the right thing AND had to pull out the incorrectly placed bottles and cans (to a degree--I wasn't dumpster-diving for one goddamn rebel can of Crystal Pepsi) that the ones who said "Fuck it" just tossed willy-nilly.  Chalk it up to my intermittent OCD.)

So we've established the reason behind my hatred of Budweiser...but we haven't yet discussed the planting of the initial seed.  This, naturally, occurred during my first job during the Associated Year.  Biological life is cyclical and life in a deli or supermarket is no different: there is a time and place for everything and everything has its time and place.

Why did that Elton John song from the Lion King just come to mind?  No, no--not the Circle of Life--the other one.

Ugh, fine--here, for your listening pleasure:


Okay...so every Thursday or Friday that I had to work (in the afternoon, again because of school--plus I'm not entirely sure of the day of the week.  Cut me slack people--we're talking about more than a decade ago!), one of the first things that I would have to do would be to put away the beer order, which would usually arrive an hour or two before I would show up.  If anyone was able to, they would put some of it away but the bulk of it was my responsibility.

So, on this one fateful day, the beer delivery bastard brought a ton of--you guessed it--cases of Budweiser.  It was quite a mix: bottles of regular Bud, Bud Light, Bud Ice, and who knows what else.  Now, by this point, I had been getting into pretty decent shape between taking care of my work-duties and logging upwards of forty-plus hours a week of basketball at the park.  I could usually put the beer away rapid-fire...and that was my mistake on this day.

We were especially busy (and, fittingly, as I remember it, it was raining out) and I really had to haul ass.  It was one of those days where you're behind from the moment your feet hit the ground in the morning.  I took care of the cans and soda that were on top and all that I had left was a good six or seven boxes' worth of Budweiser.  I grab the first case of twenty-four twelve ounce bottles of regular Bud and swing it with ease into the walk-in refrigerator (Lumiere's almost-tomb, if you will).  Then I grab the next...and the next.  By this point, I'm not even looking; it's reach down, grab, lift, twist, and swing into the fridge.  I get down to the second-to-last case of twenty-four twelve ounce bottles and, without even glancing at it, I reach down, grab it, lift, twist...

...and nothing.  The box goes nowhere.  It's as if it's cemented to the floor.  I utter a stunned stunned "OOPH" as I collapse in a heap to the ground.

I don't know how I didn't see it.  A box of Budweiser forty-ounce bottles is both taller and somewhat wider than a box of four six packs or twenty-four loose bottles.  Sadly, though, that's not the only difference.  A box of twelve-ounce bottles weighs approximately 20 pounds (18 fluid pounds plus whatever the empty bottles would weigh collectively).  A box of twelve forty-ounce bottles, however, weighs almost twice as much.  That might not seem like a big deal but it's the difference between picking up a glass filled with water and an empty glass.  If you're not paying attention and you expect it to be empty you're liable to knock it over if it's filled.  Obviously, the consequences increase somewhat proportionally with the weights involved.

Needless to say--for the first time in my life I threw my back out.

And it was b-a-d.  Pride managed to get my onto one knee and it was sheer testicular fortitude that got me standing.  Believe me--had there been a ref, I'm pretty confident that he would've called the fight...but there wasn't.

And I still had an entire afternoon's worth of work to gut out...starting with those last two goddamn cases of Budweiser forties.

Truthfully, I don't even know how I managed to make it through the rest of the day.  I think it was the fact that it was a new experience so my body was on some kind of adrenaline rush (I'm sure it had no idea of what to do--what friggin' fifteen/sixteen year old throws his back out?) and that I probably didn't sit down at all.  I don't remember walking home either...but I know I did because I showered and went straight to bed.  I also remember waking up the next day--or, rather, I will never forget waking up the next morning.

No joke--I thought I was paralyzed.  My mind went to carry me forward out of bed and all I managed to do was huddle in a crumpled mess on the floor.  It literally took me over a full minute to get myself into a cat-like position on all-fours and probably as long or longer to reach a hunched over position.  I felt like Rip Van Winkle if instead of waking up as himself he discovered, to his horror, that he had become the accursed offspring of Job and Methuselah.

I'm pretty sure I cried at this point and, if you've ever thrown out your back, you're not laughing at me but rather wincing and shaking your head in sympathy.  I was fucked.  I couldn't stand up straight, I couldn't walk correctly, I couldn't get up and down from a seated position without it killing me.  I had to call out of work and figure out what I was going to do.  My Dad showed me some exercises that I could do to loosen up my back.  I also put on my weight-lifting belt as a sort of makeshift back-brace...but it was brutal  I was out of commission for days.

Fortunately, I was a teenager and thus had Wolverine-like healing abilities.  By the next Thursday or Friday I was ready to go...and MUCH more careful about what and how I was lifting.

The problem though is that I've had a finicky back ever since then.  I was able to strengthen it once I started going to the gym...but only to a certain degree.  There are still things that will cause it to dip on me almost instantaneously (::cough:: P90X KENPO ::cough::) and it all started that day during the Associated Year.

Fact: Pandora's Box was, in actuality, a case of Budweiser forties. 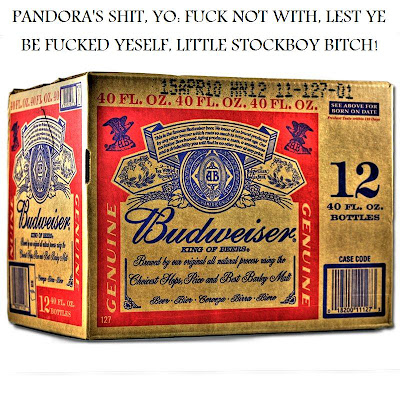