Every parent experiences it; there is no escape.  It is as inevitable and unavoidable as Armaggedon and Ragnarök.  It arrives unannounced and unexpected; there is nothing you can do to prepare for it. 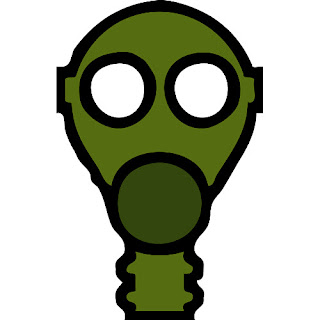 WARNING!!!
IF YOU HAVE A LOW TOLERANCE
FOR DISGUSTING STORIES
STOP READING NOW!
IF YOU ARE EASILY OFFENDED
BY THIS COLOR:
GRBROWNEEN
STOP READING NOW!
Perfect.  If you're still here then I'm hoping you're with me for the long haul here; I wouldn't want you ducking out when things start to get hairy...and by hairy...I mean wet.  Very...very...wet.  And thick.
It was only a few hours ago that my day went from "ordinary and routine" to "life-altering and emotionally/mentally scarring."  I had just changed Timmy's diaper and set about getting him situated in his highchair.  He's been eating from the spoon for a month or two now and recently we began introducing solid foods into his meal regiment with more regularity.  He has been doing well eating both cereal (Rice, Oatmeal, and Barley) and the carrots that we've begun to give him.  A bi-product of this change in his diet, though, has been a mild disruption of his regularity.  Whereas he would go once a day while consuming only formula, now it might be an extra day or two before he has a poo diaper.
Yeah...
I flip on Sportscenter and prep his bowl of cereal.  Little bit of cereal flakes...little bit of formula.  Little more of each to achieve the desired consistency...and we're golden.  I sit down in my chair and face him in his highchair.  He's energetic this morning and keeps his hands above the tray-table when I attach it.  I place his hands beneath it.  He lifts them back up.  I replace them again.  He smiles and puts them back on top.  Realizing that he thinks this is a game, I tell him that it is time to eat and he needs to keep his hands underneath the table so that I can feed him.  I remove the tray, put his hands on his lap, and replace the tray; his hands stay put.
I start spooning the cereal/formula mixture into his open mouth.  He eats it and opens his mouth for some more.  And so it goes until the bowl is finished.  I didn't put much in because during a recent feeding I had to throw out almost a full bowl of cereal when he refused to eat it and wanted formula instead.  He's sitting placidly enough, wondering why the source of his Y-chromosome is walking away when he is still hungry.  I make another bowl of cereal with a slightly larger amount in there.  I sit down and continue to feed him.
If this were Armaggedon, this would be the point that the skies would grow dark.
After a few more spoonfuls of cereal, Timmy's face suddenly turns a deep purple color.  It made me think of Willy Wonka given how vivid the color was and how pervasive the hue proved to be (his entire head turned purple).  Then, like a swifly passing thundercloud, the color disappeared and he returned to normal.  I realized that he was pushing and I felt bad for him knowing that he's been backed up a little.  I think nothing of it and continue shoveling cereal into his mouth.  A few minutes later, when we're almost done, he turns purple again.  Though I understand his biological need to evacuate his bowels, I am also aware of Newtonian physics: for every action there is an equal and opposite reaction.  I tell Timmy, "Be careful buddy--you're pushing one way but you might wind up having stuff come out the other way."  I was afraid that he was going to throw up because he was pushing too hard.  His color returned to normal, I finished feeding him, and he seemed happy.  He looked adorable with cereal caked onto his face and his big toothless grin facing my own smiling visage.
I grab a napkin and wipe off as much cereal as I can (he has it on his cheeks, on his chin, under his chin on his neck).  I fetch a second napkin and get the rest of it.  I take his bib off and inspect his neck roll.  It is clean and I am both surprised and happy.  I remove the tray table and see a blob of cereal on his pudgy thigh.  I am confused first as to how the cereal could have fallen beneath the tray table and second as to how it could be this color when the barley I had fed him was a dark beige.  That's when I realized that it wasn't cereal.
It was poop.
On his leg.
And then I saw it.
The Fecal Ragnarök had arrived. 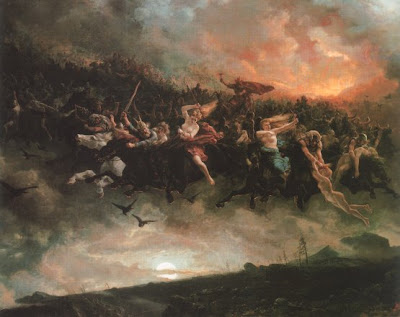