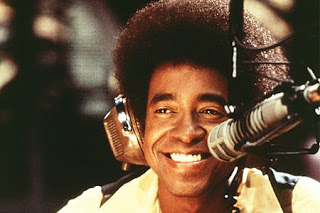 Part of why I enjoyed the show "Seinfeld" as much as I did during its nine-season run is because of the parallels I found between the lives of the characters and my own.  I speak in particular of the random occurrences and coincidences that served as the comedic cornerstone of many episodes (and, truthfully, of my life as well).  I seem to be a magnet for these sort of experiences, as my wife and many of my friends can attest, if for nothing other than the sheer quantity of episodes they have been a part of or have been privy to.  It seems as if I cannot pass a single day without having at least one random and often unintentionally humorous moment.  Something as seemingly innocuous as a trip to the grocery store has the potential to turn itself into a blog entry with one chance encounter.

How was that for a segue?

So in my last post I drew a parallel between babies and puppies, referencing, in particular, their seemingly fail-safe ability to spark a conversation with someone, usually a woman.  The traditional example is of a man walking in a park with a puppy and drawing the attention of numerous nubile young women.  They will approach the man and comment on how adorable the puppy is, thus opening the potential for conversation, either flirtatious or casual.  I can confirm the validity of the latter type of this example from personal experience.  I had taken my sister's unbelievably cute pure-bred Jack Russell terrier to the park one summer afternoon.  Heather had jokingly warned me that I better not talk to any of the pretty girls who would likely come up to me wanting to pet the cute puppy.  Having never owned a dog and obtaining only cursory knowledge of the supposed allure of a puppy, I rolled my eyes and headed out.

My plan had been to walk to the park near the neighborhood elementary school, then up the block that leads to the larger public park a half mile away.  The former park was literally a two minute walk from my sister's house.  Needless to say, a half hour after leaving my sister's place, I was still in the elementary school park.  I had gotten stopped by a total of eight women (many of whom were walking dogs, themselves) and engaged in conversation.  Much of the dialogue was about how cute Dylan was, what breed was he, how old he was, and other mundane bits of information.  Whether or not any of the women flirted with me was lost on me; I was somewhat oblivious to such moments as I was spoken for and did not actively pursue any such conversation...much like today.

But today...it was unequivocal.  I was hit on and it was all because of Timmy.

"Of course!" you say.  "He's a cute baby--what woman wouldn't come up to you and say something or strike up a conversation?"

And I would say: who said anything about a woman?

That's right.  I mean exactly that.

Now, before I continue, I need to make reference to the photograph that I posted at the beginning of this entry.  In order for you to appreciate fully what is to come next you need to know not only who Leon Phelps is but specifically how he speaks.  So if you find yourself unfamiliar with his body of work, I can find no better sample of his elocution than this:

It happened after I collected my cold cuts from the deli section of the local supermarket.  I had Timmy in his jogging stroller (incredible maneuverability--indispensable in stores with smaller aisles) and found myself stuck behind an octogenarian right next to the frozen treats freezer.  Ordinarily, my Aries nature would kick in and I would seek the quickest route around him and storm past, angered that he would deign to rob my life of precious seconds by making me wait.  Today, though, I found myself in a calm enough mood and decided to wait it out.  He was asking a store employee where something was.  I don't remember what it was but I knew it was on the other side of the store and that he would probably get his ass in gear sooner than later so as to reach and acquire said foodstuff before Thanksgiving.

Needless to say, he got his cart a-rolling and I pressed forward two more aisles until I reached the one with the milk and bread.  Unfortunately, there was a traffic jam of sorts as a woman with a shopping cart blocked most of the aisle and another one attempted to pass her from behind.  There was also an employee stocking the dairy and juice case.  I found myself at this impasse and knew that I could not make it down to where the milk was at other end of the aisle with my gigundous stroller and said shopping carts needing the same space.

And that's when it happened.

I swear to you--he sounded EXACTLY like the man in the video above.  Same lispiness and underlying sexual angst and virile self-assuredness.  Yeah...not what you want to hear when that someone is speaking to you.

I look up and find myself speechless.  (Please understand that this is an occurrence rarer than a blue moon and a total solar eclipse happening in the same month...or Paula Abdul and Lindsay Lohan being sober simultaneously.)

Then he speaks again.

"Aww...I bet he just zips around in that thing thurr--am I right?"

I say yes and note that the stroller is great for getting around supermarkets.  I don't know what else to say.  I try to escape by pressing forward down the aisle but the women are blocking the way with their carts.  I have no choice.  I back up.  Which spurs the snake-skin boot adorned troubadour to continue his conversation.

"That must be great for joggin' and such..."

And then it happens.

I won't lie--I blushed.  Not because I was flattered but because this is happening in front of two women and at least one if not two store employees.  And I'm trapped.  (There is no Murphy/Mahony to come running across the field to save me; I'm on my own.)

I mumble some reply in the affirmative hoping he will simply walk away; he does not.

"Yeeeeaaahhh...I get it [the stroller] is real good for joggin' and runnin'.  You jog and run too, right?"

"Yeeeeaaahhh...I can tell.  No excuse not to exercise with that thing thurr!"

Finally, the woman at the back of the aisle passes the one blocking my way, smiling and thanking me; I am convinced she smiles not because of my polite gesture of backing out of the aisle to allow her passage but more as a result of a benevolent pity.  I can almost get through...but now I have to back up to let the first woman out.

And that's when he sees Timmy.

That's him sucking in his breath.

I should have said something like Peggy or Crawl The Warrior King but instead I said only, "Timmy."

And that's when he flirted with the baby.

"Aww, well hey there Timmy!  Can I climb in there with ya?"

He chuckles jovially.  I smile, nod, and bolt down the aisle to grab my milk, hearing him say, "Yeaaaahhhh....no more walkin' fo' me today!  Wish I had one of those to be pushed around in!" over my shoulder.

I get to the register...and find myself stuck behind a different octogenarian.  The register-boy is staring at him, nonplussed.  I see the early-bird-special-lover attempting to count his money.  I hear the register boy repeat (likely for the third or fourth time) the gentleman's total.  The man seems confused.  He is holding a large quantity of small bills.

I notice (as I look over my shoulder to make sure that Lou Gossett Laides Man isn't seeking intercourse with me ("I'll take an entendre," says Sucio Sanchez to the bartender.  "An entendre, it is!"  "Wait wait!" Sucio Sanchez interjects.  "Better make it a double.")) that the woman working the next register over is smiling and waving at Timmy.  She seems nice...and not interested in my genitals...(or Timmy's?)...so I ask her if her register is open and then make a hasty escape from the old man (still counting his money...hell...I'll be he is STILL there right NOW counting it!)  The woman and I banter a bit about Timmy and the importance of organic milk over regular milk (she explains to me, confidentially but kindly) before I swipe my credit card, grab my packages, and begin to depart the store.

On the way out, though, I see the Ladies Man at the first register...with a woman who is dressed as outlandishly as he is.  And now I am thoroughly confused.  Is she his wife?  His twin-sister?  Just a friend?  The implications of each are expansive.  Ultimately, I realize that the exit is in front of me and my remarkable encounter behind me; it's time to beat feet and go to the bagel store to grab my lunch and continue my ordinary day.
Posted by The Stay At Home Scholar at 5:01 PM