The Dumpster
or
Eve's Scorn
Towards the end of the summer, or possibly even during the very early autumn, I knew that I wouldn't be at the job for much longer.  It was a huge relief to know that all of the bullshit that I was dealing with would come to an end at my discretion.  I started coming to work with a smile on my face and, every time I was mistreated, I met it with an "Aw shucks, it's okay!" type of mentality.

I was just counting down the days until I would say goodbye to that shithole forever.

Surprisingly, that far into my tenure I was given a task that was theretofore never undertaken.  The boss had replaced some of the fluorescent bulbs in the store...and the effect was amazing.  It transformed the store from a drab, sad looking place into a bright, enervating one; it really did blow me away.

Naturally, a small supermarket has a number of overhead lights, each of which usually consists of two fluorescent bulbs.  If you estimate that there were something like twelve aisles and each aisle had anywhere from four to six light bulb bays...you can imagine how many bulbs were replaced during this little project.

And what do you do with dead fluorescent light bulbs?  Well, throw them out, naturally...

...however, as I would come to learn, you can't just throw them into the dumpster or into garbage bags (they wouldn't fit into the latter, anyway).

Needless to say, once the bulbs were all changed, it became my task to dispose of them properly.  Fortunately, Lumiere had given me enough of a heads up that I was as careful as I could be...at least to some extent.  If he hadn't prepped me...Lord only knows what would have transpired.

I still remember the entire episode clearly: it was a drab, overcast day, and I was standing in the empty lot behind the store in between two dumpsters with my stash of bulbs.  There was a very specific way to break them and I was sure to follow this method...at least at first.

You see, the problem with breaking fluorescent bulbs (or neon, xenon, and any other gaseous bulbs) is that they are filled with some seriously toxic and potentially explosive materials: mercury, phosphor powder, and some type of gas, typically argon.

Guess what happens when you crack the bulb?

Like another Pandora's box, that shit escapes with the quickness.  You have to be careful not to breathe in the gas or to get the mercury/phosphor powder on your skin.

Usually, you would just break them against the dumpster wall inside of the container.  The dumpsters tended to be a few feet deep so you would want to crack the glass down near one of the electrodes, breaking off said conductor, and allowing all of the bad shit to escape.  Then it would just be a matter of breaking the bulb down bit by bit...

...which leads to problem number two: the glass is very, very fine, meaning that, if one were not careful, one could potentially breathe in bits of shattered glass!
Ever breathe in glass particles before?

Anyway, so for the first dozen or so bulbs I was as careful as I could be...but then something happened.  I started to get careless...and dopey.  I started just slamming the bulbs against the inside of the dumpster, breaking them into a million pieces...and giggling like a baby playing peek-a-boo.  I'm pretty certain that it was a direct side-effect of breathing in shit I wasn't supposed to be breathing in...but that wasn't the worst part.

I had two dumpsters at my disposal and I had positioned myself in between both of them.  I'm sure you've seen the type of receptacle that I am referring to: the big green ones with the handles that extend out to either side at the top, typically with a rounded end on both.

They say a picture's worth a thousand words...but this one's worth only twenty-three: 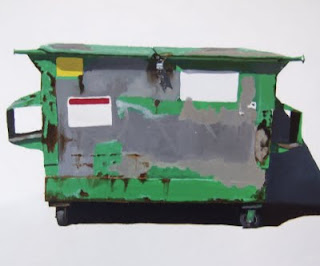 So the dumpsters weren't exactly like the one above (for one, they didn't have those weird square things on the side) but you can get an idea of what they were like.

I'm almost done destroying the bulbs, getting more and more reckless as I go...and then it happens.  I wound up breaking a bulb on the top of the dumpster, sending glass and gas particles flying everywhere.  Something hit me in the face and I FREAKED.  Immediately I brought my shirt up to my eye (because my hands were filthy) in an attempt to wipe away whatever might have hit me and I attempted to jump out of the way of the floating cloud of shit...and I slammed the right side of my rib cage DIRECTLY into the round handle-like protrusion on the side of one of the dumpsters.

I wasn't expecting it and thus my body reacted instinctually: it felt pain from the impact on my right side...and thus my legs received the signal to jump away from the danger, back to the left...

...except that the OTHER dumpster was less than a foot away, and so I slammed the LEFT side of my ribs into THAT one.

I wish I could tell you that the pain ended there...but it didn't.  I slammed BACK into the right one a second time before I just crumpled to the floor.

Seriously--I felt like I had just taken a flurry of body shots from Tyson in his prime.  The pain was excruciating.  I stopped worrying about my eyes and wondered whether or not I had either broken some of my ribs or punctured a vital organ--it was that bad.

I remember just lying on the ground laughing because it hurt so much.  Then when the ludicrous nature of the whole situation settled in upon me, I began guffawing.  I vaguely remember people passing by on the street, looking at me, and scurrying along at a quickened pace.  I can't say that I blame them, either: I probably looked like a lunatic trainwreck.

Ultimately, I blame Eve for the entire thing.  Apparently ONE rib wasn't enough for her and thus she tried to rob me of a few more by attempting to poison me, blind me, and then perform dumpster surgery.

Hell hath no fury like a Biblical woman's scorn.

And to think--I was on the verge of forgiving her for the whole "Original Sin" thing.
Posted by The Stay At Home Scholar at 3:21 PM