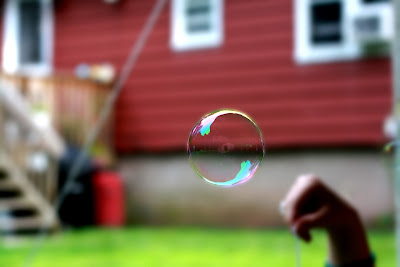 Summer has represented the climax of the year for the majority of my life.  As a child, it held the promise of warm nights out with friends, family trips, and sojourns to the beach.  I had no responsibilities--nothing to keep me from nurturing every whim and fancy.  Time, in all its malleable glory, transformed from something measurable by the day (or the very second, during the school year) into an almost indeterminate entity governed only by the quantity of daylight.  It was, in a pair of words, potential incarnate.

As an adult, I have still been influenced a great deal by summer and all that it entails.  During my undergraduate years in college, though, it represented more of a reprieve from group work and finals than the time-frame of pure possibility of my youth.  Anchored down by the responsibility of work and the financial limitations of adulthood, I no longer found myself being thrilled by prospects of days wasted lazily on end.  Instead, I enjoyed three-day weekends courtesy of the CUNY-mandated summer schedule, looked forward to lunch breaks and the imminent return to my air conditioned office on warm days, and felt a general ease that had managed to remain from the days when the biggest concerns that I had were whether I should play with G.I. Joes or Transformers that day, or where I would be riding my bike that day.

I was fortunate to have still had a summer during my employed days; working in an educational field will do that.  I never had to worry about wearing a suit on a 97 degree day nor did I have to face the depression that comes with 80 hour work weeks in July and August.  Even in graduate school I was spared having to take classes during the summer, electing to do so only once for a course that proved to be more like a book club than an intensive seven weak academic endeavor.  And, of course, post-undergraduate years were always filled with a massive road trip ('05 Florida, '06 Cross-Country & Atlantic Canadian Provinces, '07 Hawai'i & West Cost, '08 Alaska Highway, '09 Ireland, '10 Cleveland & Detroit, '11 Chicago/Milwaukee/Minneapolis)!

Last summer was the first one that ever really felt different.  It was a time of enormous change in my life--change that was welcome but theretofore unexperienced and thus not without a certain degree of fear.  My son was growing and my wife was going back to work full-time.  I was not daunted by the task of caring for Timmy as I had already been assisting Heather for four months by that point.  What I was afraid of, then, was the uncertainty that surrounded my new role.  Would I like taking care of Timmy by myself?  Would Heather want to continue to work?  What changes would be coming that I hadn't been able to predict?

I bring up all of this because of some reflection that I had done recently on a walk with Timmy.  I try to walk a few miles every day--usually no fewer than three and no more than five or six, depending upon the day.  He will sit quietly in his stroller munching on some kind of snack and sipping his juice or ice water contentedly.  Though I do occasionally speak to Timmy on these walks, either pointing things out or just conversing with him in a general way, the vast majority of the time I think quietly to myself.  Indeed, this is a habit that I have had for quite some time.  It is how some of the most important elements of my writing have come into existence and some of the most critical decisions of my life have been made.  Sometimes the thought is purposeful and directed at a particular problem or situation but other times it is relaxed, wandering freely from whatever surfaces from the ever-bubbling cauldron of my subconscious.

Earlier in the week, I found myself thinking about the summer and how this was the first time that I wasn't looking forward to it the way that I had done previously.  Though I always enjoyed varying aspects of the other seasons (the crispness of the swirling autumnal breeze, the sensation of snuggling beneath a plush blanket to avoid the frigid bite of winter, and the welcome warmth of the return of spring), summer was the one I looked forward to most, primarily because of the slowing down that would occur with work, the lack of academic responsibilities, and the (generally) comfortable weather.  I realized that, for the first time in my life, I was viewing all four seasons with equal excitement--that which was usually reserved for the central months of the year.

The reason for this sudden adjustment is linked indelibly with an event that will be coming up in six days: one of the final "milestones" of Timmy's toddlerhood.  On the 26th of this month, Timmy will be eighteen months (or 1.5 years as I have been wont to say) old.  Six months thereafter, he will officially be two years old and no longer a baby; he will be closer to being a little boy of three than an infant or newborn.  To me, this auspicious occasion marks the end of Timmy's "babyhood" and the true genesis of his growth and maturation into a true toddler and child.

Based upon earlier blog entries that I have made, one would think that I would be crestfallen over this momentous event...but I am not.  In fact, I am filled only with excitement for the future instead of yearning for the past.  In fact, just last night we were in the presence of a couple with a seven-week old little girl.  Seeing Timmy standing next to her as she was being held made me realize just how much he's grown.  Truth be told, I couldn't even fathom him being that tiny...but he had been--I have the pictures (and memories) to prove it.  I am encouraged by my reactions, both to the revelation that those days of him being a tiny, helpless infant and that he is becoming his own little man more with each passing day; they signify, to me at least, that I am approaching his inevitable growth with more acceptance than I had been doing previously, and that I am transforming whatever negative energy that would have been spent on ruing the things that I can no longer do with him into positive energy in the form of excitement for the future.

And thus the reason that all the seasons have become summer for me.  Now that Timmy is growing, there are more and more things for me to look forward to, all of which can be divided up by the seasons.  I am looking forward to future autumns filled with the wonder of the leaves changing colors, to Halloweens and trick-or-treating, to pumpkin carvings and Thanksgivings.  Winters hold the promise of snowball fights, igloo and snowman building, and of sledding.  Springs will yield the flourish of Nature's return, of hikes through forests burgeoning with life and color, and of preparation for future summers.

Indeed, there is so much to look forward to that the idea of looking back with disappointment now seems frivolous.  Timmy has his whole life ahead of him and, God willing, I will get to experience that life right alongside him.  That old adage about living life again through the eyes of a child is undeniably true.  I am not only re-experiencing things through my son--moments filled with remembrance of the past--but also experiencing them for the very first time as an adult and as a parent.  In this way I am afforded the opportunity to see things and to reflect on them through two different lenses simultaneously.

I'm getting to live and to re-live every season of my youth and adulthood.  At least now I won't be dreading September or going through those end-of-summer blues!
Posted by The Stay At Home Scholar at 12:09 AM