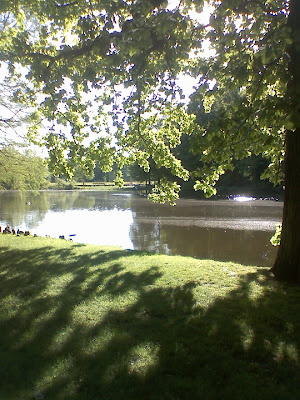 I had a really awesome morning with Timmy this past Friday. Finding myself filled with energy around six in the morning, I decided to take advantage of the gorgeous weather and get outside earlier than I normally would. I fed Timmy, threw on a pair of shorts and a t-shirt, and headed out. Knowing that it was going to be chilly I had bundled him up quite well but neglected to bring my own fleece or hoodie with me; I regretted it almost immediately as a cold breeze coursed over me.

After walking Heather down to the bus stop, we turned left up Victory Boulevard and headed out for a walk to an undetermined destination; I had decided to let the morning guide me and it ultimately did not let me down. Though it was chilly, I found myself growing more oblivious to the temperature as I turned my focus towards the hustle and bustle of the early morning and the incredible light of the day.

I had forgotten how much I enjoyed being out so early in the day and made a vow to try to get up earlier each day and to take advantage of the extra few hours to take longer walks. I talked to Timmy as we walked and, when he fell asleep, I turned to people watching, observing those who were conducting their morning shopping, those rushing off to work, and those waiting either for school buses or city buses. I felt refreshed and relished the conflicting sensations of the warm morning sun cascading down upon me and the chilly breeze blowing through the streets of Staten Island.

My stomach gurgled as I approached and passed the entrance to the CSI campus. Knowing that I was going to cut through Willowbrook Park, I decided to stop and eat the egg-white sandwich and banana I had brought along for breakfast. The park was surprisingly empty and I took the bench that seemed to be beneath the most sunlight. After locking the wheels on Timmy's stroller I set about munching on my sandwich. I sat and watched the waterfowl socializing and playing in the large pond in front of me. A few moments later I heard the voices of two approaching parkgoers. Two elderly men were walking with two unleashed dogs. I heard one say, "Nah, he'll be fine--he doesn't like bananas." I looked down and wondered if he was referring to me but paid them no mind. Then I heard him add, almost as an afterthought, "He's got a sandwich though..."

The next thing I knew, a friendly and obviously hungry black lab came sauntering over to where I was sitting. He nudged his nose into the foil that held my sandwich, as if asking for a share. His owner (presumably) apologized and told the dog to come. I gave him a scratch behind the ears and a pat on the head before turning back to my meal. He wound up coming back two more times but ultimately trotted off to get back to his group. I had been a little wary since Timmy was right there but fortunately the dog was more happy than hostile.

As the quietude returned, I sat and took it all in, truly observing my surroundings for the first time. I heard and saw a woodpecker doing his thing on a tree a few dozen yards away. I spotted a cardinal and heard some blue jays behind me. The raucous screech of the latter melded with both the knocking of the woodpecker and the flat honking of the geese and ducks, creating a cacophonic symphony. Aside from the aural aspect of the morning, I was most taken with the lighting. I regretted not taking my SLR with me because the gilded, glistening rays filtering through the trees splashed effortlessly on the park path, illuminating it with its morning glow. I felt at ease and smiled at Timmy. Even though he was asleep and completely oblivious to his surroundings, it was nice just being there with him. 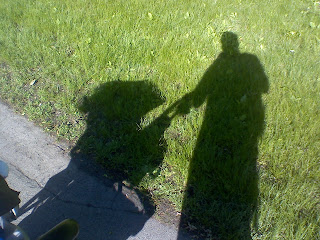 After taking the photograph at the beginning of the post and the one to the right with my cell phone, I felt rejuvenated and ready for a long haul along Richmond Avenue. I wasn't sure of exactly how far I wanted to walk but I knew that it was roughly an eight-mile roundtrip between the house and the mall, and that I wanted to eclipse ten miles total if possible. We strolled along Richmond Avenue and again I fell to people watching, observing the families frantically dropping off their young children at a day care center. I found myself feeling an immense relief that Heather and I opted to have me stay home and watch Timmy instead of enrolling him in infant day care. Though there is nothing wrong with that option (and, for many, it is a necessity), I know that we selected correctly in choosing to have one of us raise him as opposed to gaining additional income by having both of us work full-time.

Before I knew it we were over by the mall. I felt fine and I knew that it was still relatively early. Picking up my pace, I found myself having to navigate some remarkably high curbs as I traversed the sidewalk along Richmond Avenue. By then I knew that I wanted to reach Arthur Kill Road as my final destination. I was concerned about the final stretch between the mall and the aforementioned Arthur Kill because I did not know what condition the sidewalk would be in, if there was one at all. Everything wound up being fine and I paused as I crossed over the runoff from the Great Kills dump. 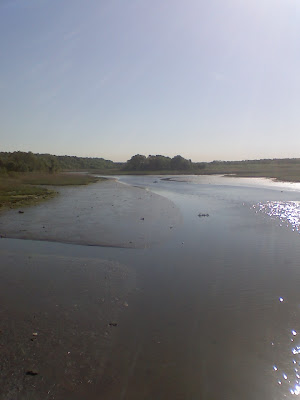 For a disgusting body of water, it wound up being quite picturesque at that time of day. I wound up reaching the intersection of Arthur Kill and Richmond and promptly turned around. I had passed by a daring trio of cyclists who were riding quite close to the right lane of traffic; I was grateful I had the sidewalk. I began to regret not having stretched before leaving as I felt my hamstrings and calves tightening up on me on the return trip. By the time I reached the service road near Victory, they were absolutely burning. I didn't mind until I realized that I would be going for a fairly strenuous hike in roughly twenty four hours. I decided to take it easy for the remainder of the trip.

In the end, I wound up covering almost exactly eleven miles in a little more than three hours (including my break for breakfast)--a respectable distance and pace. I'm hoping to do this at least twice a week, as much for the exercise as for the quality time with both Timmy and nature. For all the bad things that can be said about Staten Island, I found myself grateful to be living in the Borough of Parks, especially during the early morning hours.
Posted by The Stay At Home Scholar at 11:24 PM