A Milestone as a Parent and a Man

I stand before you filled with the pride of ages; today is an historical day, worthy of inclusion in the National Archives.  Today, I dismantled Timmy's bassinet...without any instructions...and wound up getting every single piece back into the original box that it came in...without breaking or losing anything!  I am not ashamed to admit that a tear fell from my eye as I gently lowered the flaps at the top of the box and saw the symmetry that they created, folding back atop and sliding beneath one another like seasoned lovers. 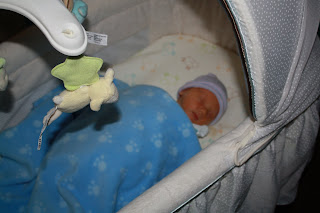 It was a surreal experience dismantling and putting away Timmy's bassinet; I remember putting it together barely five months ago.  I remember exactly how I felt at the time as I looked inside: excited that at some point soon it would be filled with a tiny life; nervous that I would be responsible for this little person who would be relying entirely on me and Heather for his every need; and thrilled by the prospect of the unknown that (at that point) lay ahead for me and Heather.  I cannot believe that so much time and so little time has passed simultaneously.  It feels like I have had Timmy in my life for years and years but, in reality, it has been only and exactly sixteen weeks as of 2:34 p.m. today.

In the past four months, he has grown so much, not just physically but mentally and emotionally.  I remember his tiny cries when he was hungry and when I would then feed him barely two ounces; now he's taking down anywhere from eight or more in a single sitting.  He was so delicate then and now he's nearly sitting up on his own.  He would look around seeing nothing but blurry shapes and shadows (I would presume) but now he looks at my face and he smiles; it is that smile that has helped my wife and I through some difficult times in the past few weeks.  Nothing can turn my day around quicker than a smile and a giggle from my beautiful baby boy.

I wasn't sure of how I would feel taking apart the bassinet.  I worried that I might feel wistful and sad, dejected by the fact that my boy is growing up so fast.  Instead...I found that I really didn't feel much of anything.  I wound up going on to put together his bookcase for all of the stories that Heather and I read to him.  Deconstruction and construction, side by side.  The days of his infancy are fading away but they are being replaced with the rest of his life.  I understand why parents feel sad when their child outgrows his or her first clothing, or encounters some other milestone that indicates that they are growing up but, at the same time, I feel like each noteworthy moment marks a new chapter and a new beginning rather than the end of a previous one.  Call me an optimist if you'd like but I have things that I am looking forward to with each stage of Timmy's development.  Most recently it was his smiling; next it will be moving him to solid foods (and the many, many adventures I anticipate having with THAT!); later on it will be him sitting up on his own and developing stronger locomotive skills and coordination.

It is inevitable: someday he will outgrow his crib and we will have to convert it into a bed.  Then he will head off to his first day of school.  He'll have his first crush, his first kiss, his first broken heart, and his first taste of true love.  Eventually, he'll be driving himself places and, God willing, heading off to college, getting married, and beginning a family of his own.  Nothing I can do will prevent this from happening and so instead I choose to relish every moment that I have with him, to appreciate the usage of the things that I have put together, and to reflect on that as I take them apart.  Each stage of his development brings with it new and exciting things to learn about, to experience, and someday to look back upon.

With any luck, I'll be able to lock all of those moments inside of my mind and my heart, never losing their recollection and emotion, fitting them together deep inside of my soul to make room for new memories with my baby boy as he grows up into a young man and beyond; I have a bassinet sitting snugly in a box that says that I should be just fine. 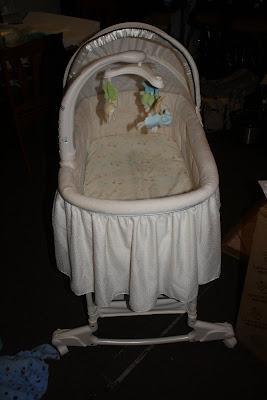