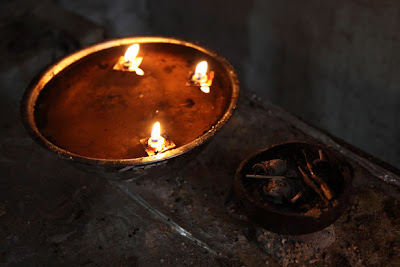 774. It wasn't anything I thought consciously about; it had appeared in my mind's eye without so much as a breath of effort. I waited patiently for the page to load and for the chime indicating that I had new mail to go off. It sounded. 774. I smirked, unsurprised, and clicked on the first new piece; this had happened before.

For as long as I can remember I've had an uncanny, nearly-unconscious precognitive ability. It is not something that I have ever been able to hone, nor have I ever tried to obtain mastery over it. It would be nice to know what number would come up next at a roulette table or what the blackjack dealer was holding...but somehow that doesn't seem right; it's not how things are supposed to go.

I call it a parlor trick of the mind, or, at times, a psychic twinkle. More often than not, it manifests itself in innocuous, meaningless ways. I've lost count of how many times I've woken up in the middle of the night, wondering what time it was, then seeing a number in my mind's eye, and either rolling over to see that exact time or the clock or waiting a few minutes and then experiencing the same thing. Sometimes it's the temperature on the thermostat (I'll know that it's 72 degrees upstairs before I get up there, for example), or, as it was today, some other random number like the amount of mail I keep saved in my AOL inbox.

All of that, though, pertains to the parlor trick aspect of it; the psychic twinkle episodes have been a bit more arcane. I've had moments of precognition where I reach for my cell phone a second before it rings; on a few of those occasions I was even thinking of the person who called or texted me right before the phone went off. The most common way that the psychic twinkle seems to make itself known is also the least explainable. On dozens of occasions I have thought of someone, either a friend or a family member, and knew that something had just happened to them. Sometimes it's something positive, like finding out about passing test scores, or getting good news, but more often it's not. Usually I get a funny feeling that something unsettling or upsetting has just happened to that person and, when I speak to them later on, I'll ask them if everything is okay. Depending upon the strength and clarity of the feeling, I'll offer details as well. The result is often a moment of surprise or shock followed by confusion and then an explanation for what happened and a question as to how I knew; I'm almost never wrong.

The single most bizarre experience that I have had like this involved a dream. I hadn't seen nor spoken to my brother for a few months as he was out to sea with his naval unit. One night I had a dream that I was standing with him atop a docked submarine. It was night and nearly pitch black; we were both wearing dark-colored pea coats. The frigid air flew in wisps away from his mouth as he spoke to me, unconsciously lifting his gloved hands to his mouth and blowing on them for additional warmth. I had a foreboding feeling throughout the dream and, at the end, he said goodbye to me and walked up a strange, spectral staircase that led skyward from the submarine. I woke up in tears fearing that he had died. When I calmed down I realized that I was reading too much into the dream; still, though, the feeling gnawed at me, persisting and growing in intensity--something had happened.

Finally, when I could stand it no longer, I called my sister and asked if she had been in contact with our brother. Detecting the heightened emotion in my voice, she said yes and asked me why I was asking. I told her that I had a feeling that something bad had happened to him, that he was injured or somehow endangered. She remained silent on the other end of the line for a few tense moments before informing me that the previous night (when I had had my dream), my brother had slipped while performing a watch atop the docked submarine and injured his back. She was as amazed as I was by the prescience of my dream.

Though I have had other far more fantastic experiences than the aforementioned dream, I must turn away from my reminiscences and focus instead on the purpose I wished to elucidate through this entry. It goes without saying that there is much that we do not understand about ourselves and the world we live in. It also goes without saying that children have far more active and lively imaginations than we do. What I found myself wondering early this morning, though, is whether or not children are more attuned to such supernatural phenomena and, if so, what types of experiences do they have? Their version of "normal" differs greatly from that which we, as adults, are conditioned to accept. Is it truly that children's imaginations are more powerful than adults'...or is it simply that we must turn our faculties away from that which is viewed as fanciful or whimsical and instead use our brain power to focus on the banalities of balancing budgets and drafting weekly shopping lists?

I ponder these things because, as I look at my son, sleeping serenely, I can't help but wonder...what secrets of the universe is he privy to that go unseen or unnoticed by the rest of us? I have watched him sleep hundreds of times in his three months of living and, as early as his first few days of life, his eyes darted to and fro behind his lowered lids; he was dreaming, or so it seemed. Researchers can offer only their best of postulations as to what babies dream of, positing that it is their daily experiences that are being relived in their sleep. I've spent entire days with Timmy where nothing out of the ordinary has happened and yet as he sleeps he will let out a whimper, clenching his face as if in great fear. Was he recalling a series of faded shapes swirling before his face from earlier in the day...or was it something else?

Perhaps there is something to be said for reincarnation. I've long since wondered if babies are born with recycled souls, so to speak. They cannot move nor can they speak for a relatively predictable range of time, one that is undeniably tied into their physiological and neurological development...but what if it's something more? I've played around with the theory that during the period that infants cannot speak they are going through a process of forgetting the memories of their past lives. It could explain why infants have bad dreams or why they dream at all. It could also explain why many of us have those metaphysical moments of remembering something that has never happened to us before. Of course, it could also simply be neural impulses that have nothing to do with such fringe-science worthy topics; it is all subjective anyway.

Still, I cannot help but wonder whether or not Timmy sees, hears, feels, or otherwise experiences things that both Heather and I are oblivious to. I have had scores of eerie experiences throughout my life where I have felt an unseen presence in the room with me. During the first week that Heather and I lived in our apartment after moving in, we heard someone coming up the steps from the first floor up to the main level of the apartment, and then up to the loft where we were sitting. The footfalls were deliberate and unmistakable; this was not an old house settling. Both of us feared that someone had broken into the apartment as we heard the footsteps reach the landing directly in front of us...and yet no one was there. The sound stopped as the last step was trod upon--the one that was level with where we sat. We sat in pensive silence, holding our breaths, waiting to see what, if anything, would materialize...and then we felt nothing. It was as if whoever or whatever it was wanted simply to scope out the new tenants living in the house.

I bring up the previous point because Timmy has exhibited signs of detecting an unseen visitor in the house on a few occasions. Once, while Heather and I were sitting and playing with him on the floor, he looked up with mild surprise and proceeded to turn his eyes across the room behind us, as if following a moving figure. He fixed his gaze at a point on the other side of the room where, naturally, there was no one, and he remained staring for a few seconds with his head cocked before turning his attention back to us. We have had guests over who have held Timmy when, suddenly, he will look up and past them, as if watching someone who is standing, unseen, directly behind them. One of our friends picked up on this and even asked if there was someone behind him (incidentally, this is a person who has shared in many fantastic and unexplained phenomena with me in the past, so this type of thing is nothing new to him).

I suppose I will have to wait until Timmy can speak to get a better sense of what he sees and hears. If my experiences with uncontrolled paranormal activity (such as the mental parlor trick and psychic twinkle), as well as those that were controlled (a perfect record of twenty-five for twenty-five with Tarot predictions, for example; it's been years since I've dabbled with the cards--I put them down because it didn't feel right...it was as if I was divining the future using some sort of dark power. The feeling was both unnerving and addicting), it might suggest that I am either predisposed or inclined to such things. I do not think that there is anything unique or special about me and would offer that I am probably only mildly more open to these sorts of happenings than other people. Then again, it could all just be in my mind anyway.

Somehow, though, I don't think that that is the case. I'm looking forward to seeing if my son shares in any of these experiences but, if he doesn't, at least I'll be able to tell whether or not he's late coming home when he's a teenager...all without looking up at the clock!
Posted by The Stay At Home Scholar at 3:20 PM