102.2!!! It sounds like some popular FM radio station that features some upbeat dance mix or modern rock hits, no? Not in this case. In this case it's four digits and a dot that made my stomach drop last night and today.

I intentionally left out a few details in my posts yesterday so as not to come across as whiny or negative. These details (as well as 102.2) will now help to elucidate the way things have gone for forty-three of the past forty-eight hours. While I was dealing with all of the whirling emotions that were stirred up yesterday, as well as the bowel-infused battlefield I found myself on, I was also handling some physical issues. Between three o'clock Monday afternoon and eight o'clock last night, I had eaten exactly two granola bars, one Jack Daniel's chicken sandwich at TGIFriday's, and half of a tuna sandwich. I had also managed ninety minutes of sleep Monday night into Tuesday morning (3:45 am to 5:30 am for the detail-hungry). What completed the trifecta was a stomach bug that had me running to the bathroom with frightening frequency yesterday morning.

I spent the morning and early afternoon feeling drained from a lack of sleep, an empty stomach, a sick stomach, and the torrid guilt I was feeling coupled with how much I was missing Heather; then I tried to eat the tuna sandwich. All of the tension that I had been feeling made my entire upper body very tight. Unfortunately, this also made the food's journey down my gullet all the more difficult. Halfway through the tuna sandwich I got hit with a wicked hiatal hernia. I felt like I had swallowed a watermelon...sideways. I tried sipping water to loosen the knot but to no avail. Finally, feeling the impending urge to purge, I ran downstairs and knelt before the porcelain throne...only to come up empty. This was when Timmy woke up. Starving. And frantic about his voracious hunger. The hiatal hernia didn't care.

I wound up spending the time from four o'clock until four-thirty running between soothing Timmy upstairs, tending to his bottle in the kitchen, and trying to throw up in the bathroom to alleviate the terrible tension I felt around my diaphragm. Not a pretty picture. I finally got Timmy fed but the internal (and figurative, I suppose) pressure worsened. I was physically, mentally, and emotionally drained and I couldn't get this feeling in my stomach/chest to go away. I started to freak out because I couldn't even swallow water without making it worse.

Somehow I managed to fall asleep with Timmy around five and woke up when Heather came home at five-thirty. She seemed fine emotionally but looked a little off. We wound up napping until seven with Timmy. At eight o'clock I realized that the hernia had disappeared and I was starving (having still not had a full meal since three o'clock the previous afternoon) so Heather offered to go pick us up some Burger King. She comes back and looks like she's going to pass out. I'm simultaneously grateful that I can even eat and growing really concerned about Heather's physical condition. I ask her if she's okay. She says she feels like she's going to throw up and pass out. Finally, I decide to have her take her temperature. She puts the thermometer in her mouth and it beeps in seemingly record time. She removes it and I see the digital display.

This is the worst fever she's ever had in the eight years that we've been together. My stomach sinks. Suddenly she looks worse than ever. I make her lie down and give her some water and acetaminophen. She offers to sleep upstairs so that I can get some rest. She wakes me up at five-thirty this morning. I've now had officially six and a half hours of sleep since Sunday night (it's Wednesday at this point). She looks like death. Her fever is still hovering around 102. I fall asleep standing up in front of the bottle warmer as I get Timmy his first formula of the day. Things are not off to a great start.

Thankfully, Heather opted not to go into work. I feed Timmy and we fall asleep together; Heather does the same upstairs. I wake up feeling like a new man; Heather does not. They say that the worst feeling a parent can experience (aside from the obvious) is the helplessness that is felt when a child is sick. Though I haven't had that yet, I know how helpless I felt trying to take care of Heather so I can only imagine what it will be like when Timmy inevitably falls ill for the first time.

So, having woken up filled with fresh verve, I come upstairs and burst into tears. All of the pressure and pent up emotions came springing forth. Fortunately, Heather is incredibly tough and intuitive; she knew I needed to talk. In the span of an hour I wound up figuring out some things that had been bothering me for months and, in one case, years. Suddenly, things are looking up. So is Timmy. He's on my lap looking right into my eyes. Heather says my blue eyes are like the sky and his are like the ocean. I like that and I agree. I'm losing myself in the tide of his baby-blue gaze. He smiles at me and suddenly the black clouds disappear into vapor. I feel renewed and refreshed from my nap, my cry, and my breakfast. Things are looking up.

I decide to take Timmy for a stroll around five o'clock. It is absolutely gorgeous out. I talk to him as we head up the block. He's looking at me and I know that even if he cannot understand the words that are coming out of my mouth, he's listening. I tell him about the conversation that I had with Heather, not translating it into baby-talk; I give it to him straight. Grown-up topics can be conveyed to children in grown-up language. He knows this and I appreciate that. Eventually, he passes out in the stroller. He has the luxury of turning off the world and I admire that. It doesn't make me mournful for my youth or fill me with bittersweet reminiscence for simpler times. Instead I am filled with the warmth of his tender innocence. The deep-blue oceans of his eyes are hidden behind his dreaming lids. His face has become a porcelain lake of placidity and peacefulness. I look down at him as we walk and I realize that he is my serenity. He calms me and reassures me that all is well with the world simply by resting snugly beneath his blanket. He trusts me implicitly. He knows that I will look out for him and that everything will be alright.

My tension melts away completely as we cross Bradley Avenue. I switch from talking to him (he's sleeping after all) to praying quietly for my wife and child's health, for my own well-being, for my family and friends. My head is cleared. I start to think about what I'm going to write for this blog entry; it comes immediately to my mind. I pass by the Ingram Woods and get an idea for a short story. By the time I reach Woolley Avenue it's already fleshed out. I find that I don't have a pen or anything to write on. I don't even have my phone. I make a mental note to bring something to write on and with next time. Slowly, I repeat the major points of the story in my mind, mulling them over, seeing how they taste to my mental pallet. I am pleased. I reach the halfway point of my walk at the intersection of Victory Boulevard and North Gannon and head under the Staten Island Expressway. By the time I reach Bradley Avenue and start to head back to the house I have a short story, three interlaced blog entries, and the one I'm currently writing all lined up in my mind. My stomach feels terrible but I don't. I look down at Timmy. He's still out cold with that same peaceful smile. I find myself mirroring him as I turn down our block.

Things are looking up. 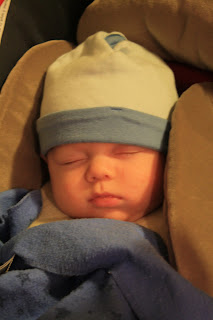