Picking up with a condensed version of Heather's pregnancy, she was the most beautiful mom-to-be I have ever seen. Each day she walked around with an ethereal glow and a smile that had a depth I had never seen before. Each week we took a photo of her burgeoning baby bump as we read through the copious literature that we purchased on the topics of pregnancy and parenting. We followed Timmy's development each week and, when his hearing began to develop, I began a tradition that I called the "Little One Concert Series," (Little One because, at the time, we were not aware of whether we would be having a little boy or a little girl). I developed setlists of songs that I would play through on my acoustic or electric guitar for Heather and our unborn child.

In August 2009 we announced our good news to friends and family. By October 2009 Heather was showing considerably as she was roughly halfway through her pregnancy. The week before her birthday we went for a sonogram at which we would possibly find out the baby's gender. We decided in advance that, if possible, I would find out but not let her know until her birthday; it was up to me to figure out how to share the news with her. Fortunately, we found out that day that we were having a boy and I set about my plan. The day before Heather's birthday, I set up a scavenger hunt that would take her all across the borough of Staten Island. I selected eighteen different locations that had some degree of personal meaning or memory for us. I drew eighteen clues by hand and included a poem or some writing that would lead her to the next location. I also included a CD as a clue halfway through that she would need to complete the hunt (this was in the event someone else found the clues first and decided to attempt to reach the end).

I found it thrilling to go to the locations and hide the clues essentially in plain-view of whoever was around. Some were placed under rocks or garbage cans that were never moved. Others were stuffed inside logs or buried slightly. I wrapped each clue in plastic and placed it in a sealed envelope. Amazingly, only ONE clue was disturbed and it wound up being replaced (this one was in a park and I suspect that a ranger saw the clue, thought it suspicious, investigated it, and returned it to its previous resting place). Finally, the next day came and I accompanied Heather on her search, ultimately culminating at a deserted but picturesque stretch of beach at the southern end of the island. It was there that I presented her with the "It's a boy!" balloon that I had purchased from the hospital the day we found out the gender.

The next few months were spent preparing for the big day.  Timmy's due date was February 16th so Heather's maternity leave began exactly one month earlier.  It was a hectic start because there was alot going on at work during her final week there and we were leaving for our annual Cabin Trip to the Adirondacks the same day she was finishing up at work.  Thankfully the trip was uneventful (in terms of the pregnancy) and we returned home ready to prepare for the final four weeks.  I had prayed for at least one week of relaxation for Heather and I to spend together before we would buckle down and begin to really get ready for Timmy's arrival.  It's a good thing that I did!

We returned home from the cabin on Monday the 18th.  On Tuesday the 19th we went for a sonogram that told us that Timmy weighed approximately 5 lbs. 14 oz. and was in the head-down position.  Thursday the 21st we went for the first of the four weekly appointments we had with the doctor.  We were quite surprised to learn that Heather was already dilating (only 1 cm) but we were informed that she could stay that way for a few weeks--"nothing to be alarmed about."  Monday the 25th I re-read through my Lamaze notes as Heather began to set up her hospital bag.  That night I had a hard time sleeping; I was worried about being away from Heather as I was supposed to attend a wake on Tuesday afternoon.  I wound up getting only three hours of sleep and woke up at 6 o'clock to drive us out to the doctor's for the next appointment.  Needless to say, in only four days, Heather went from being in ready mode to full-blown ready; we were sent immediately to the hospital.  I hadn't shaved or eaten breakfast, we didn't have our bags, nor did we have a camera.  Fortunately, when we arrived at the hospital, Heather (who wasn't feeling any sort of labor pains or anything at all) headed into the gift shop and managed to procure the only remaining disposable camera.  The timeframe then went as follows:

10:15 a.m. arrived in triage room; there were no labor rooms available.
12:15 p.m. head into labor room; Heather still isn't feeling anything despite being completely effaced and dilated.
1:05 p.m. water is burst & pitocin drip is ratcheted up to 12; contractions begin
2:05 p.m. contractions at full-strength; urge to push begins
2:34 p.m. Timothy John Benecke joins us.

Heather was BEYOND incredible!  She was the talk of the floor because of her calm, cool, and collected labor and delivery.  A half hour after giving birth she was sharing the roast beef and cheese sandwich I had gotten for lunch around 12:30; the potato salad was particularly good that day!

Fast-forward to March 2010.  Having already sent out a birth announcement to friends and family in January, I decided that I wanted to send something out to my co-workers and friends in the faculty at Baruch College.  After doing so I considered sending an announcement to the Macaulay Honors College.  I wasn't sure if they would be interested but after speaking with Heather I figured it couldn't hurt.  After all--there was the chance that Timmy would be the first "Honors College Baby" born to two graduates of the program.  I had thought that that might be the case, especially since Heather and I were the first two scholars to be married (two years after graduation).

The response from the Honors College was incredible!  First, we received a lovely correspondence from one of the founding deans who expressed her sincerest excitement for us.  She also asked that we bring Timmy or lots of pictures of him to the five-year reunion coming up in May.  The next day was when things really took off.  I received an email from the Coordinator of Alumni Relations congratulating Heather and I on Timmy's birth and informing/confirming that he was indeed the first Honors College baby.  She explained that the Macaulay family was abuzz with excitement over the news.  Shortly thereafter I was contacted by another friend involved with alumni affairs who told me that an announcement had been posted on the Macaulay website and that Timmy's picture had come up on the projector during an alumni planning meeting; Timmy was making a name for himself!

A few days later I was told that two alumni were working on a documentary that would focus on the lives of a select few alums of the Macaulay Honors College, effectively monitoring the impact that the program had on them and what they are currently doing.  They were interested in speaking with me and, after hearing about Timmy and my relationship with Heather (and the connection to Macaulay) they decided that our story was worth telling in the documentary!  So, on Tuesday, April 13th, the day that Heather is returning to work and I will officially become a stay-at-home-Dad...the moment of our parting and my first moments with Timmy at home will be recorded for the documentary!  The film will be shown at the reunion in May and, with any luck, will reach a wide audience.

I am extremely grateful to the Macaulay Honors College for all that they have done and for the willingness of the two alumni involved with the documentary to give voice to the special connection that my family has to the program.  It should be an exciting day during an already thrilling week!  More on that to come shortly. 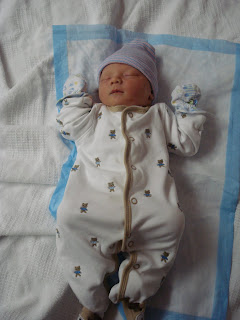 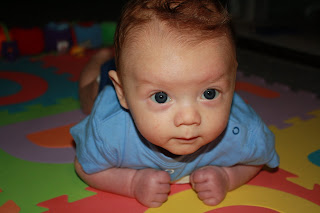