Finding Closure in the Park

Yesterday was the first full day that I've had alone with Timmy since Heather returned to work. The first day we had Christopher Figueroa, the documentarian, recording our morning, so that wasn't a full day alone together. Then the next two days Heather was home with a wicked fever. Friday, then, served as the first reliable indicator of how the next few months might be. I was quite satisfied with how everything went.

Timmy and I began the day sleeping in like two teenagers recovering from a late-night AIM marathon. I suppose I am dating myself here because, at least as far as I can tell, no one really uses AIM anymore. Regardless, we didn't get up until ten o'clock. I was unsure of what to expect from the day but I felt much calmer and more confident than I did on Tuesday. I felt like I was in control and that I had the day's length at my fingertips, to dispense with as I would.

I'd like to think that I was fairly productive. In between feeding Timmy and setting him down for naps, I made dinner, finding out how difficult even the simplest of meals might be to make. I was making a pot roast in the slow cooker for the first time. Timmy was resting peacefully in his bassinet. Right up until I removed the packaging from the roast and began to apply the spice rub. That was when he woke up. It wasn't his "I'm hungry" cry nor was it "I need a diaper change" cry. Nope--this was his, "I want to be held cry." My hands were dripping with remnantal blood and Montreal Steak seasoning. I had potatoes that needed to be scrubbed and peeled, as well as an onion and some garlic cloves that needed tending to. Fortunately, Timmy held out long enough for me to get the roast browning and my hands cleaned. Sufficiently soothed, he fell back to sleep and I managed to combine the rest of my ingredients in the slow cooker.

Feeling like I was on a roll, I decided to tackle the laundry and straightening up the bedroom. I like to clean (and do pretty much everything) to music, so I grabbed Heather's laptop and brought it into the bedroom with me. I propped Timmy up in his Boppy pillow on the bed and began broadcasting some Godsmack and old school Metallica; he fell into an even deeper sleep. Unfortunately, with the laptop comes Hearts (my recent addiction) as well as Internet access. It took me a few hours but when the dust settled I had accomplished what I wanted to do.

At this point I realized that it was getting late in the day. The morning had been quite overcast and the cloud cover did not appear to be interested in relenting any time soon. After checking weather.com's hour-by-hour forecast for the day, I saw that there was only a ten percent chance of precipitation between three o'clock and six...and a ninety percent chance thereafter. Since it was a little after three o'clock I decided that we could squeeze in a brisk walk and be home before five o'clock (or, at the worst, six). Either way, we'd beat the rain home.

As I went through my mental preparations for the walk, I realized that this would be the first time that I would be taking this journey solo. I knew that I wasn't going to take our normal three mile route and would instead be heading to the park; I'd need to take the bookbag that we use to haul all of the necessary items for Timmy's care. The lazy part of me jumped to the forefront of my mind and said that Heather probably had everything we needed already packed; I opted to double-check. After all, I'd need to be thorough in packing the bag each time we'd be going out; I wouldn't want to have to deal with the scenario of not having any wipes or back up outfits if the worst happened (like it did along the pedestrian and bike path along the West Side Highway). 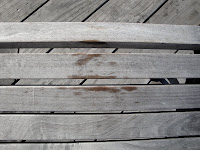 I took the opportunity to pack a weather shield that we bought for the stroller. Instead of setting it up though I opted simply to toss it into the bag. I got Timmy all set in his car seat and prepped myself. I was wearing basketball shorts (as I prefer to do whenever I'm heading out for exercise) and a t-shirt but knew that it was probably really chilly out. I tossed a hat on Timmy and snuggled him into a blanket. I donned a grey hoodie, my sunglasses (as much to keep the pollen out of my eyes as to protect from the non-existent sun glare), and tossed my phone and bluetooth headset into the front pouch.

We set out beneath the leaden afternoon sky and turned left down our block. Ordinarily, I would head the other way and then follow the highway service road down to Victory Boulevard before coming back the other way. That route usually runs anywhere from three-and-a-half miles to more than four depending upon where I decide to cross back over on the return. This time, though, I knew I wanted more of a physical challenge. My goal for the spring and summer is to walk six miles a day during the morning and/or early afternoon with Timmy, and to then walk an additional three miles every evening with Heather. I'm hoping to drop fifteen or twenty pounds by the end of the year; this seems to be the best way to do it.

Heading down our block in the other direction, I decided that we would head to Clove Lakes Park. There is a truly wicked hill there that provides me with a sufficient challenge; a few trips up would be enough to tire anyone who isn't in prime physical condition. Using my headset (tucked safely beneath my hood, which I had raised), I called Heather and spoke to her. I must have looked quite bizarre wearing bright blue basketball shorts (on a fairly cold day), a grey hoodie, sunglasses, pushing a stroller...and seemingly talking to myself. After finishing up my conversation I found that I had been hit with a Blarney moment. Before I knew it, I had called a friend to wish him a happy birthday and another friend to discuss getting together for coffee, having previously called and left messages for my sister and best friend.

Finally, as I neared the park, I tuned into the peacefulness of the afternoon. I began to lose myself in thought (as I am wont to do on such walks) and mulled over some recent story ideas. I had expected to develop them further and, with any luck, to come up with new blog entries or other story nuggets. To my surprise, though, my mind kept focusing on one person. Time after time, I felt the hurt, disappointment, and frustration caused by this person rising and falling, like a tide of emotion deep within me. I passed by a man on an isolated part of the path, making a mental note to keep an eye on him. There was something that I didn't like about him though he was harmless; I did not encounter him again. I did, however, return immediately to brooding on the person who held my internal attention.

Numerous times during my walk I passed by other park-goers. On a few occasions, we smiled briefly at one another, offering a friendly if rushed wave of greeting. I reflected on the fact that there was some unconscious sense of community among the people who were exercising. People who were out for a stroll rarely paid me a glance but those who were walking with determination, perhaps making their second or third lap through the park, offered a smile that might have been interpreted as affirming and encouraging.

I opted to take the long way around the baseball field over by the basketball courts instead of simply crossing the bridge back towards the large hill. I found myself lost in thought about the person plaguing me. I realize that I had tried to fight this inevitable conclusion and have ultimately lost; I indulge my mind, the part that wants to put an end to this long and drawn out drama between this man and me. As I walk, I play through everything that has happened and I realize that, for the first time, I have the scent of closure wafting towards me. I comb through the most recent set of circumstances that have led me to where I now stand, physically at the foot of the large hill in Clove Lakes Park, emotionally at the longstanding resolution to my problems. The time had come to exorcise the demons festering within, birthed in the rotting marrow of this fading friendship.
Posted by The Stay At Home Scholar at 3:52 PM